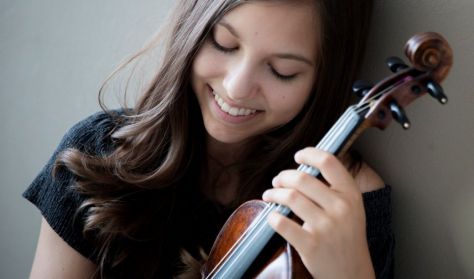 “Bevilacqua is much more than a child prodigy: despite her young age, she has enchanted audiences with her grace and technical style everywhere she has performed…Clarissa dominates the stage with her sound and musical interpretation. Most of all, she possesses great communication.”

“Bevilacqua is much more than a child prodigy: despite her young age, she has enchanted audiences with her grace and technical style everywhere she has performed…Clarissa dominates the stage with her sound and musical interpretation. Most of all, she possesses great communication.”

“We were fortunate to attend a concert played on that violin by a 15-year-old prodigy, Clarissa Bevilacqua…. It is an electrifying experience to hear the precision and richness of the sound of the ‘Vesuvius’ coming from the hands of such a young performer. The old and the young intersected in one magic moment.”

“And then she starts. And all of a sudden it’s just her and the Stradivari. The hand flies, no music score, the eyes closed, the face expressions accompany the notes. Magic…”

Praised for enchanting the audience with her musical interpretation and style, Clarissa has always had a passion for music. She started playing the violin at age five, and debuted at the Pritzker Pavilion in Chicago in front of ten thousand people when she was nine years old. She has performed at Carnegie Hall in New York, and has given solo recitals and concerts in the United States and Europe. She is the youngest violinist chosen to perform at the Auditorium Arvedi in Cremona with the precious Stradivari collection of the Violin Museum. She has been chosen as a Young ArtistTM by the New York based Si-Yo Music Society Foundation, a group of established international artists who have made a significant impact on the music world. She is the recipient of the ‘Breaking Ground Artist’ award by Picosa Chicago, the ‘Young Talent’ award by Sony Classical Talent Scout and the Guadagnini Scholarship by the Rotary Club. She has won prizes in several national and international competitions. Clarissa is the youngest student in Italy to earn a Bachelor of Music degree; age sixteen; she graduated summa cum laude from the Conservatorio Nicolini in Piacenza. She participated in masterclasses at the Mozarteum SommerAkademie with Pierre Amoyal, at the Accademia Chigiana with Boris Belkin and at the Venice Music Master with Pavel Vernikov. She now studies with Pierre Amoyal in the Master Program at the Mozarteum University in Salzburg. Other mentors include Daniele Gay and Olga Kaler.

Carrollton Center for the Arts
Violinist